During our remaining days in Seoul, we visited two more palace complexes. Like most historical structures, much of the Joseon Dynasty’s first royal palace, Gyeongbokgung, was destroyed during the Japanese colonial period.

Reconstruction has been ongoing since 1990 but the structures that are standing today are impressive and palace guards in period costumes added to the atmosphere.

The part of Deoksugung, Seoul’s smallest palace complex, that stood out most to us was Seokjojeon, the first western style building constructed

within the walls of a Korean palace. This huge stone structure with it’s European style rose garden and beautiful fountain looks quite startling surrounded by traditional Asian buildings.

In addition to our afternoon in Insa-dong, we spent quite a bit of time strolling through Namdaemun Market, Seoul’s second largest market area. Located a few blocks from our motel, this complex maze of tiny crowded stores and street vendors selling all sorts of foods and ready made items was fascinating. We

also visited the Shinsaegae department store, the city’s oldest and definitely one of it’s finest. What a contrast! From the noisy, crowded market where much of the activity takes place in the street to the opulent department store where name brand items are tastefully displayed in spacious surroundings. Of course, the prices are just as different and so are the food venues – from street vendors selling both raw and ready to eat foods to an entire floor of classy restaurants.

Our visit to Seoul also included a subway ride to Samneung Park to see some uniquely Korean royal burial mounds, a couple of hours at the National Folk Museum and a visit to Namsan Park, the upper portion of a small mountain in the centre of the city. We rode a cable car up into the park then ascended the Seoul Tower by elevator. From the observation floors, we enjoyed views of the enormous city spread out below us.

We left Seoul on the morning of Wednesday, August 13 and traveled by express train to the port city of Busan, located on the country’s southeast coast. Traveling at speeds of up to 300 km/hour, we were in Busan in just under three hours. The train ride gave us an opportunity to see the countryside between the two major cities. Korea is a land of lush tree covered mountains with most of the usable land between the hills being used for agricultural purposes.

Busan is Korea’s second largest city and is an industrial and commercial centre as well as a centre for domestic and international trade. Compared to the vibrancy of Seoul, it seemed somewhat quieter. It is, however, a popular tourist destination for Koreans because of it’s beautiful beaches. It seemed a good spot for us to unwind and relax after our very busy days in Seoul. We especially enjoyed Haeundae Beach which was like nothing we’d ever seen before. We literally shared it with thousands of other people! Earlier in August, the Haeundae District had vied for the Guinness World Record for the number of parasols installed on a beach. I don’t know if they were successful or not but an estimated 12 000 colourful parasols are set up on the 1.5 km stretch of pure sand each day during the peak season. For 5000 won (approximately $6) we were able to rent a beach mat and space under a parasol for the day. Vendors wandered up and down the beach all day long selling food and drinks. It was noisy and crowded but fun and we enjoyed playing in the ocean waves along with hundreds of others. 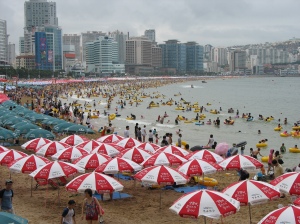 Our second day at Haeundae was cooler and I got quite chilled after spending some time in the water so, rather than spending the entire day on the beach, we walked the promenade circling Dongbaek Park, a wooded knoll jutting out into the ocean next to the beach area.

While in Busan, we also visited Yongdusan Park where we went up the Busan Tower and enjoyed spectacular views of the city and the harbour and Taejongdae Park where we rode the 4.3 km circuit on a cute tram getting off at various spots along the way to enjoy the ocean views. We were especially intrigued by the open air “restaurants” set up on a rocky point below the lighthouse. Shaded by colourful tarps, visitors sat on wooden platforms overlooking the water and were served fresh seafood by women who cooked it out in the open.

What were some of our overall impressions of Korea? Had we not spent six months in Japan first, I’m sure we would have experienced culture shock but since the two countries are similar in many ways, we didn’t. We did observe that Korea is much dirtier, however. In spite of the fact that there are very few garbage cans in public places in Japan, it is a very clean country and we have quickly grown used to that. As mentioned previously, the Korean people are less reserved than the Japanese so it’s a noisier, more vibrant place. We enjoyed it thoroughly but I was very happy to come “home” to Japan!

One thought on “Korea continued”