We explored the Costa Rican rainforest from every angle! The views from the back balcony of our little cabin were spectacular. 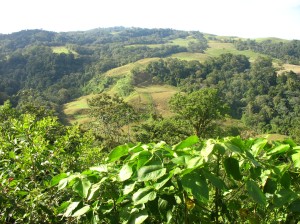 By far the most fun, however, was flying through the treetops on our zip-line canopy tour! I can now say with absolute certainty that I have overcome my fear of heights! It was an absolute blast and there wasn’t a moment of fear!  Securely fastened into our harnesses and attached to the cable by pulley, we wore thickly padded leather gloves on one hand to use as a brake as we approached each platform. Eleven cables ranging in length from 50 to 500 metres in length took us from platform to platform high in the treetops. Totally exhilarating! The only negative thing I can say is that it was over way too soon! If you haven’t tried zip-lining, I definitely suggest adding it to your bucket list! I’d do it again in a heartbeat!

We did our zip-lining at Hotel Los Lagos which was just down the road from where we were staying. Though the views from the cable were spectacular there really wasn’t time to pick out any wildlife hiding in the canopy. After the tour, however, we had full use of the Los Lagos grounds for the rest of the afternoon. That included soaking in their many hillside hotspring pools and exploring their gardens complete with a few rainforest animals. I wouldn’t have minded meeting this one in the wild

but I’m glad we didn’t come across this one on our next adventure!

The hike to La Fortuna waterfall was an easy one, one that we could have done on our own with no difficulty but a guided hike was part of our package. It was supposed to be a group hike but as it turned out, Richard and I were the group! No one else had signed up for that particular excursion so we had David all to ourselves and what a delight that was! Not only was he a very pleasant hiking companion but he was incredibly knowledgeable about the flora and fauna of the rainforest as well as his country in general. With the aid of his sharp eye and ear, we saw all sorts of things that we might have walked right past without noticing… howler monkeys resting on a branch high above us, a mother sloth with her baby moving ever so slowly through the canopy, and a wide variety of birds including a brightly coloured toucan. All of these were too far away for me to capture them with my point and shoot camera but we enjoyed close-up views through David’s binoculars and though they’re not be recorded on film they’re definitely etched in memory. 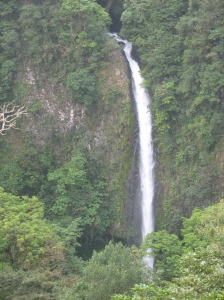 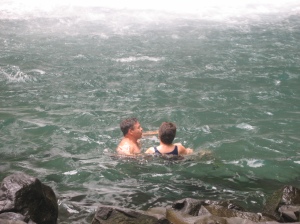 The waterfall itself is a 70 metre ribbon of water plunging into an emerald pool below. We expected the water to be icy cold and while it was a bit chilly getting in, it really wasn’t unpleasant at all. Many swimmers have lost their lives by venturing too close to the cascading water and being pulled under by its force. I can certainly see why. Once we were in the water, the sheer magnitude and power of the falling water seemed to beckon us to draw closer but we wisely chose not to! Instead, after a short swim below the falls, we moved downstream to a quieter pool for a more leisurely swim.