October has long been one of my favourite times of year. It’s a bittersweet in-between time; summer is over but winter hasn’t arrived yet.

In my mind, October is golden. We don’t see the reds and oranges that eastern Canada is famous for at this time of year but we have gold; golden fields at rest after harvest and this outside my front window! 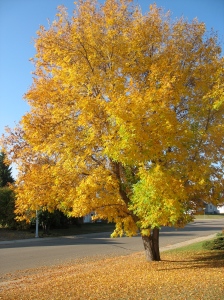 Sadly, in no time at all it will look like this, taken during the first week of November last year.

And that’s on one of its best days when it was dressed in hoar frost and the sun was shining on it. No, I’m definitely not a fan of winter but that’s one of the things that makes October so special. Each golden moment is precious because we know it won’t last.

Early October is a time of celebration at our house with both our wedding anniversary and my birthday falling during the first week. Canadian Thanksgiving, celebrated on the first Monday of October, follows hard on their heels.

Later in the month there’s another date that’s important to me. It was 37 years ago in mid October when I surrendered the life that I’d already screwed up royally to the awesome Creator of the universe who had a purpose and a plan for my life (Jeremiah 29:11) and what a difference that made!

As winter approaches, some may consider October a time to hunker down close to home but though days are shorter now and nights are cooler, Canadian poet William Carman Bliss expressed the feeling of my heart when he penned

There is something in October sets the gypsy blood astir,
We must rise and follow her;
When from every hill of flame,
She calls and calls each vagabond by name.

Hello, October! I wonder what you have in store for this gypsy girl this year?