I first hiked Johnson Canyon, one of the most popular day hikes in Banff National Park, as a university student in 1974 and I’ve been wanting to do it again ever since. On Sunday, I finally did!

The parking lot was already full by mid morning when we arrived and the trail was packed with tourists. Catwalks affixed to the limestone cliffs make the canyon easily accessible to everyone and the 1.1 km trail to the lower falls involves very little change in elevation.

At the lower falls, a bridge crosses the creek allowing both an excellent spot from which to view the falls and access to a water-formed tunnel through the rock to a closer viewing platform. 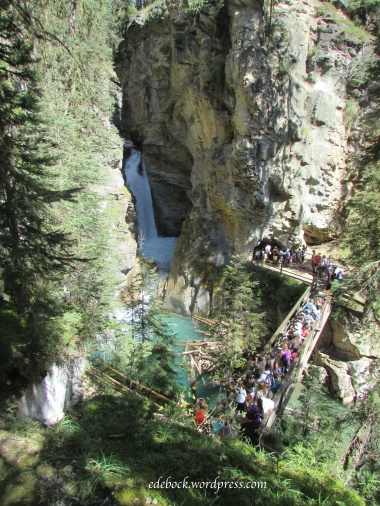 The crowd thinned out a little as we moved on toward the upper falls, another 1.5 km up the trail. Spectacular views continued to surround us as we followed the crystal clear creek. 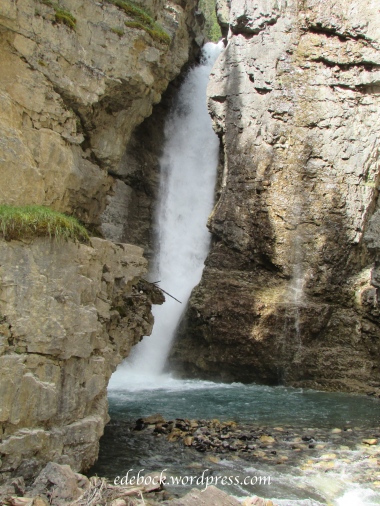 There is significantly more change in elevation on the way to the upper falls and by the time we arrived at the bottom our two little grandsons decided that their legs had hiked far enough. Our son and daughter-in-law took them back to camp while Richard and I pushed on. It was a short climb to the top of the falls where we enjoyed great views of the falls themselves and the deep pool at the bottom.

Beyond the upper falls, the trail leaves Johnson Canyon behind and climbs another 3.1 km to the Ink Pots, seven cold mineral springs that bubble to the surface forming small pools in an open meadow. These springs are unique in that they have a constant year round temperature of 4ºC and their basins are composed of quicksand.

I had not hiked beyond the upper falls in the past and wasn’t expecting the steep climb that was involved. Once we’d set out, however, I was determined to finish! The trail seemed to go on forever, climbing higher and higher. Younger legs passed us by, but we pushed onward and eventually reached our goal! 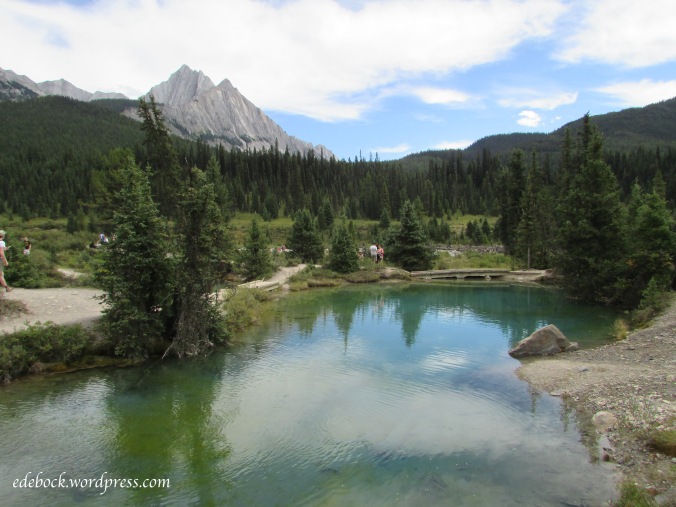 My old knees were a bit achy the next morning, but a soak in Banff’s Upper Hot Springs was all they needed to recuperate!

Last week’s 70s girl post got me thinking about another favourite style from that era that has returned in recent months. Chokers are back! Or did they ever really go away? They were popular in the 70s, again in the 90s, and now they’re being seen yet again.

One of my favourite chokers of the 70s was a cameo on a wide velvet ribbon. Another was a leather cord with wooden beads. Those were pretty typical of the era and looked good with the flowing tops and dresses of the day.

The choker of the 90s often had an edgier, gothic look. I think my daughter was in junior high when she wore one that looked exactly like a shiny black dog collar. I’d post a picture, but I suspect she’d hate me for it!

Today’s chokers are more reminiscent of the 70s. Here are a few examples: 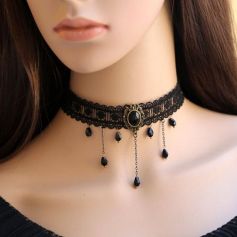 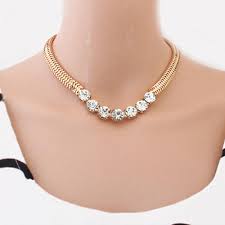 While I’m definitely not a proponent of age related fashion rules, it’s my personal opinion that chokers usually look best on the young. Because the skin on our necks is thinner than elsewhere, it tends to loosen and wrinkle earlier. As a result, our necks may look older than the rest of our bodies. Why draw attention to that?

On the other hand, I recently found this one in my jewelry box and I’ve decided to wear it again. Made of pewter and gold plate, it was a gift from a good friend back in the late 70s. It’s a bit longer than most chokers and it’s shape tends to draw the eye down, away from my 63 year old neck.

Do you have any favourite fashions from days gone by? Would you wear them today?