When you travel with Air Miles you don’t always have the choice of the shortest or most direct flights and sometimes that’s okay. When we flew to Mexico on February 9th, we left Calgary at 10:25 AM and after a two hour layover in Houston, arrived in Mexico City at 7:50 PM local time. Yesterday’s return trip was a lot longer, but also much more fun.

It was 5:15 AM when the alarm clock rang in our Mexico City hotel room. Forty-five minutes later we were in a taxi on our way to the airport. After being in the air for four hours and crossing two time zones, we touched down in Las Vegas at noon. Our connecting flight didn’t leave until 7:20 PM. We had seven hours to kill in Vegas!

After claiming our suitcase and passing through US Immigration and Customs in record time, we rechecked the luggage and caught a cab. I had the driver drop us at the Excalibur, close to one end of the famous Las Vegas Strip, where I stayed in November 2014 with the Rav4.

This was Richard’s first taste of Vegas. We started by dropping into the Excalibur’s lobby casino to try out a few of the penny machines. I soon turned my dollar into $2.50, but Richard lost his and it was time to head out and explore Sin City, USA! It was much chillier than my previous visit, but that didn’t seem to put a dent in the happy crowds strolling up and down the Strip enjoying its shops, restaurants and street performers. We joined them, stopping at Tom’s Urban for a late lunch.

Continuing our walk, we arrived at the Bellagio just in time to watch the famed fountain show and then went inside to see the spectacular Chinese New Year display in the opulent hotel’s conservatory. 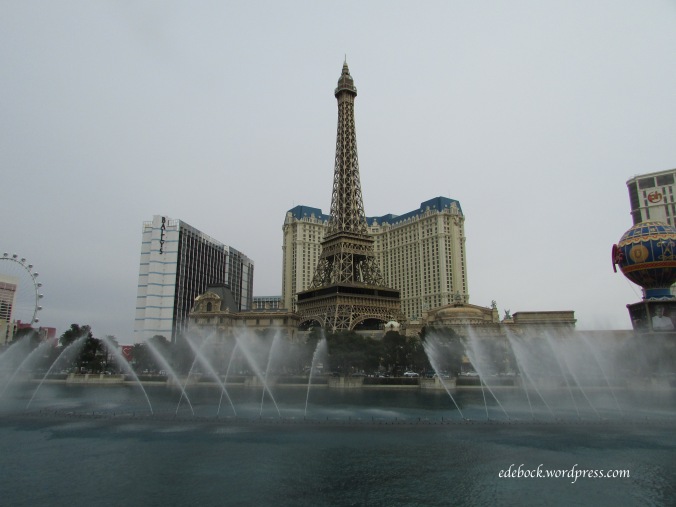 Crossing the Strip, we made our way back to the Excalibur where we spent another half hour on the machines before catching a cab back to the airport. Seven hours in Vegas was definitely the best layover we’ve had in all our travels!