If you know me or you’ve been reading my blog for very long, you already know that I’m not a Trump supporter, but what does that have to do with fashion?

Earlier this week, while traveling with her husband, Melania Trump stepped into the Sicilian sunshine wearing a colourful appliquéd jacket by Italian fashion house, Dolce & Gabbana, that sells for $51,000 USD.

And that probably doesn’t even include the matching clutch! 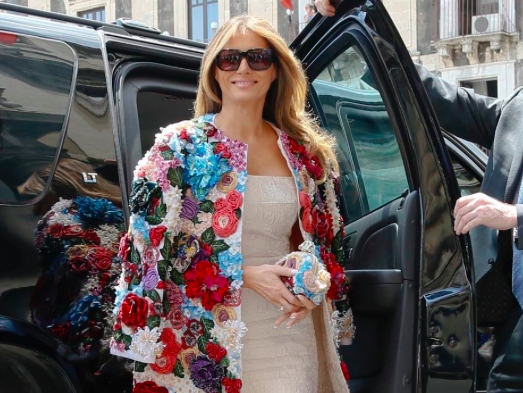 Contemplate for a moment the fact that electing Donald Trump was considered a triumph for the common man. He fashioned himself as a proud champion of the ordinary American who was fed up with big money running the country. Then consider that his wife’s jacket sells for just $5516 less than the median household income for the United States in 2015 (the most recent year for which data is presently available) which was $56 516. I don’t know of any common man, or woman, with a clothing budget like that one!

I can’t help wondering what the common American would do with that $51 000. Pay off their mortgage? Send their kid to college? Pay for health insurance? $51 000 would buy a lot of groceries!

One of the things to consider when trying to decide if the price of a garment is too high is cost per wear. It makes sense to put more money into an investment piece that will be worn many times season after season than an item that will only be worn a few times. If Mrs. Trump wore her jacket once a week for the next five years, it would still cost almost $200 a wear!

Unbelievable, and in my opinion, inexcusable!

8 thoughts on “How much is too much?”