On October 2, 1996, Richard and I celebrated our 20th wedding anniversary with an intimate catered dinner party for ten people including our three teenage children, my bridesmaid, and his best man. I wanted a new dress for the occasion, so a girlfriend and I went to the city to shop. I had no idea what sort of dress I wanted, but I knew that it had to be special. After trying on a LOT of dresses and almost giving up entirely, we found the perfect one. Dark green embossed rayon that draped beautifully, tea length, flutter sleeves, scoop neck. I felt like a princess! 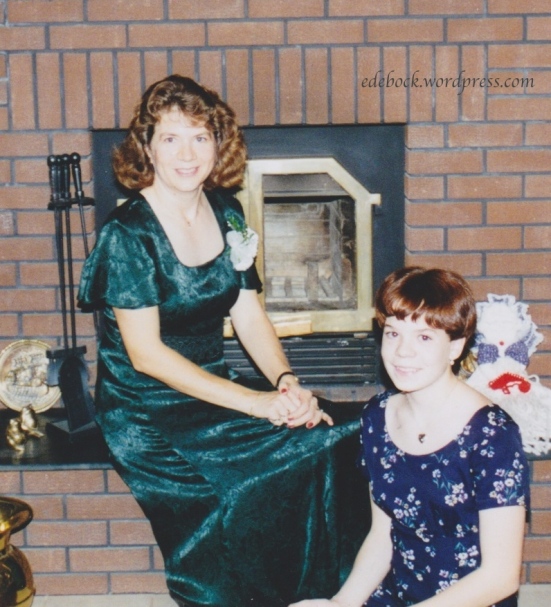 Over the next few years, I wore the dress for a few other special occasions and then I carefully put it away in storage. I knew that I didn’t want to part with it, but little did I expect that our daughter would ask me to wear it to her wedding on December 16, 2006! 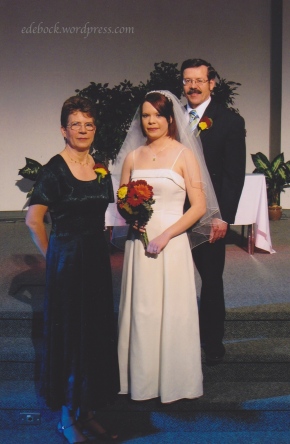 After Melaina’s wedding, the dress went back into storage and rested there for another twelve years. Last Saturday, I wore it again! Very close friends celebrated their 30th wedding anniversary with a vow renewal ceremony and reception. Like Melaina, Dan and Michelle were university students who married during their Christmas break from school. They didn’t have a big celebration or a dance, but thirty years later they had the “wedding” that Michelle had always dreamed of! I knew I’d want to wear something special.

Clothing is generally considered vintage when it’s at least 20 years old. My now vintage dress seemed the perfect thing for the occasion! This time I wore it with light pink pumps, Michelle’s favourite colour, and an emerald necklace that was my mother’s. 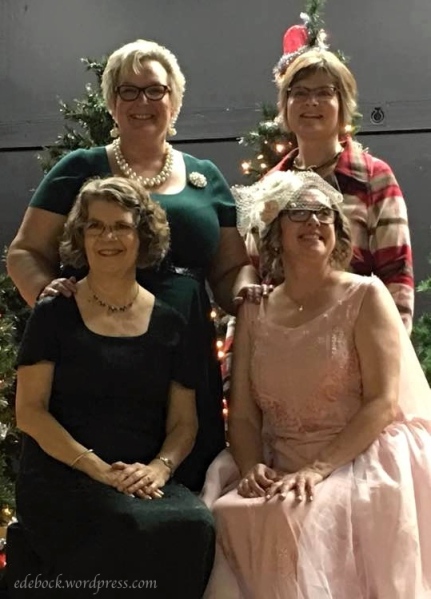 Girlfriends! We call ourselves the Rav4.

That’s the “bride” on my left. The flower girl had just knocked her headpiece askew!

I wore the dress again on New Year’s Eve and now it’s back in storage. I wonder if it will appear again someday and what the occasion might be?

4 thoughts on “The life story of a dress”