After two very intensive days in Rome, we decided that days three and four should be a bit more laid back and relaxing. We were able to manage that without sacrificing any of the things we most wanted to see and do.

Our third morning was spent exploring Castel Sant’Angelo, originally commissioned by Roman emperor, Hadrian, in the first century AD as a mausoleum to house his remains and those of his descendants. Unlike other Roman monuments, the mausoleum never fell into disrepair. Over the centuries, in addition to serving as a tomb, it has been used as an impregnable fortress, a prison, a magnificent Renaissance dwelling, and now a national museum.

Beginning in the 14th century, the popes converted it into a castle. It was eventually connected to St. Peter’s Basilica by a covered fortified corridor and the fortress was used as a refuge by Pope Clement VII for several months during a time of siege. It owes its present name to a medieval legend. In the year 590, the Archangel Michael is said to have appeared there before Pope Gregory the Great to announce the end of a plague.

Once inside, we felt as if we’d taken a huge step back in time.

I loved the statues of the Archangel Michael as a strong warrior. The first one shown here is inside the castle walls and the bronze one is on the pinnacle.

From the top, we had amazing views like this one with St. Peter’s Basilica in the centre.

We could see that there was a storm moving in though and sure enough, before we got back down to ground level, it hit with a vengeance! We sat under cover and ate our lunch while lightning flashed, thunder rumbled, and rain poured down. Thankfully, it blew over and we were able to wait it out.

Leaving the castle, we made our way across the famed Ponte Sant’Angelo or Bridge of Angels, completed in 134 AD by Emperor Hadrian to span the Tiber and connect the city centre to his newly constructed mausoleum.

We eventually made our way back to the Church of Sant’Agnese in Agone on Piazza Navona for a free concert. There we listened to two choirs sing entirely a cappella. We couldn’t understand the words, of course, but the acoustics in the 17th century church were amazing and the voices blended beautifully.

We started our final day in Rome at Villa Borghese, a huge public park. It was a peaceful spot away from the usual crowds of tourists, but after wandering a bit, we decided to move on.

At nearby Piazza del Popolo we climbed up to the Pincio Terrace for a beautiful view of the piazza and Rome itself.

A visit to Rome wouldn’t be complete without sitting on the famous Spanish Steps. This 135 step staircase was opened in 1735 to link the Spanish Embassy near the bottom of the steps with the Trinita del Monti, the late Renaissance church at the top. They were made particularly popular by the 1953 movie, Roman Holiday, starring Audrey Hepburn. It was a great place to sit for awhile soaking up the sun, watching the world go by, and treasuring our final moments in Rome. 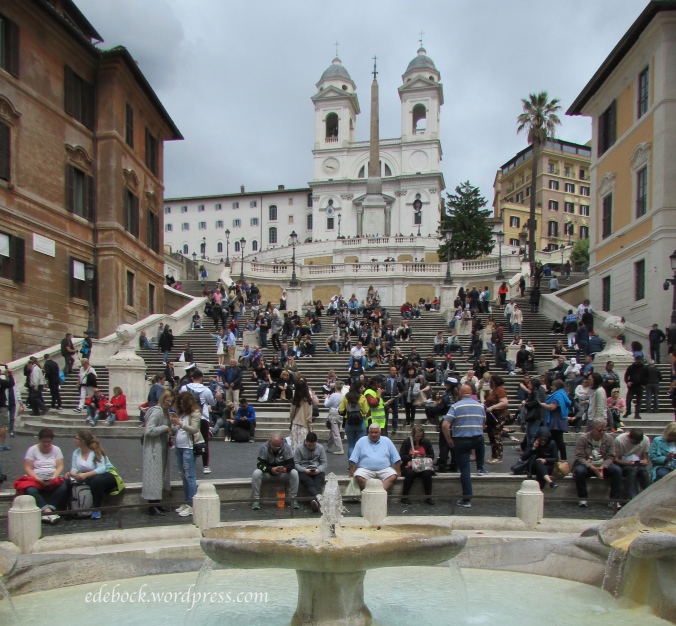