At nine o’clock on Saturday morning the taxi dropped us off at the Avis car rental office in Bruges, Belgium where we picked up our wheels for the day, a brand new SEAT Ibiza with only 61 km on it! 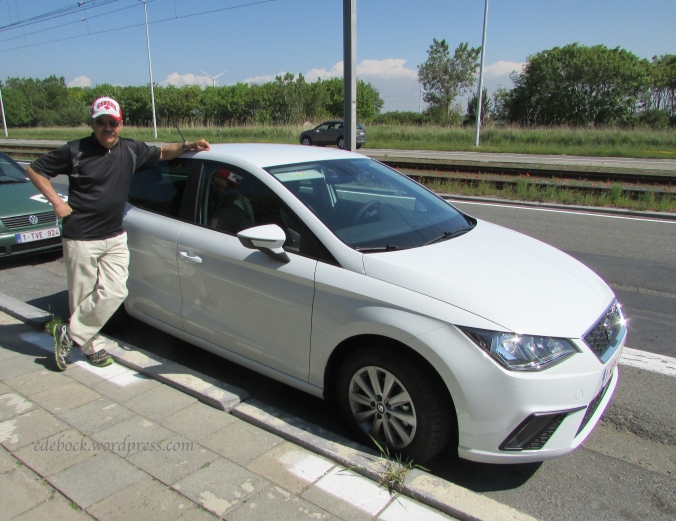 Sticking to smaller highways and backroads, we set off across country to the small community of Verrebroek, not far from Antwerp. It was from Verrebroek that Richard’s great grandfather, Joseph Leopold DeBock, emigrated to America as a young man. Here’s the very first thing we saw when we pulled into town! 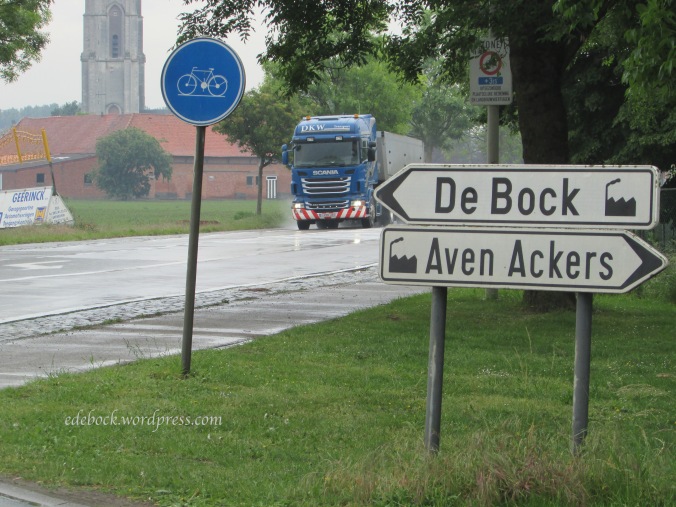 A bit of online research prior to our trip had taught me that there were large De Bock businesses in the area, but unfortunately they’re closed on Saturdays or we would have dropped in to say hello. Interestingly, the North American branches of the family that descended from Joseph Leopold spell DeBock without a space between the e and B while in Belgium it’s spelled with a space. We assume that, as often happened in the past, immigration officials probably made an error in recording Joseph’s surname when he arrived in the country.

We visited the Verrebroek cemetery and found a number of De Bock graves. Clearly, there must be an older cemetery somewhere in the area, but everyone we talked to directed us to the one we visited. One of the oldest graves there belonged to Leopold De Bock who was born in 1883 and died in 1960, no doubt a relative.

After eating lunch in a little sandwich shop in town, we set off again retracing our path partway back to Bruges and then turning toward the ocean and following the coastline. Just past Zeebrugge, we stopped to spend some time strolling on the wide expanse of sandy beach that seemed to go on forever. This misplaced coastal girl needs a bit of sea air once in awhile! 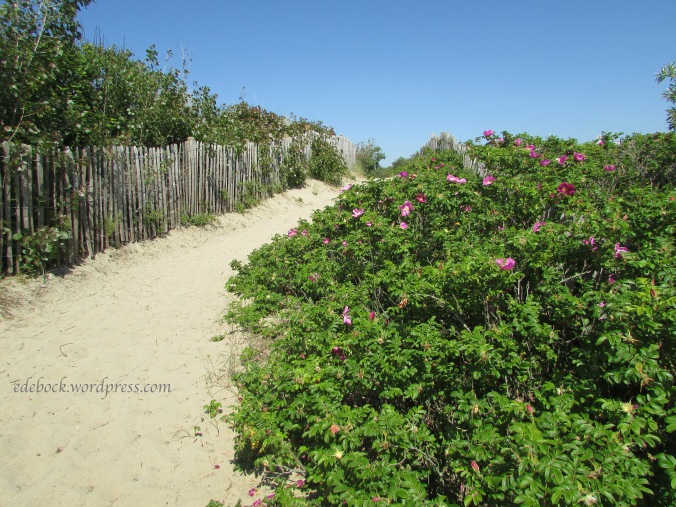 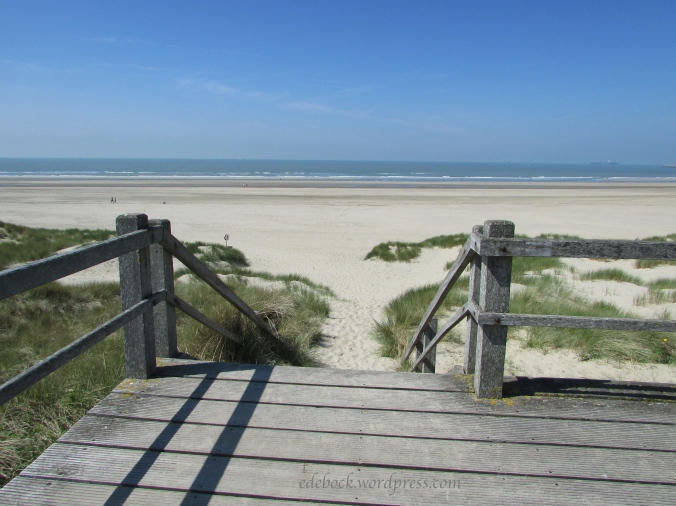 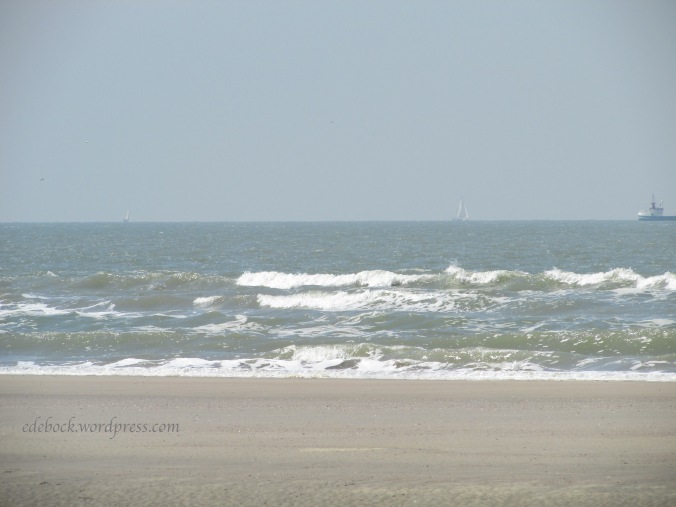 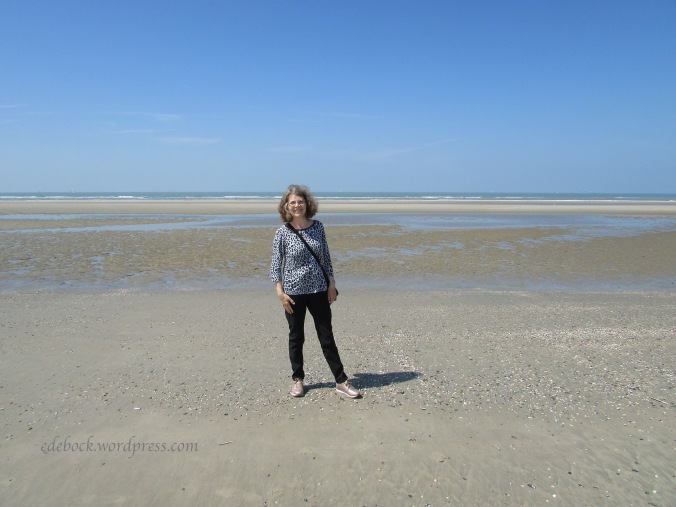 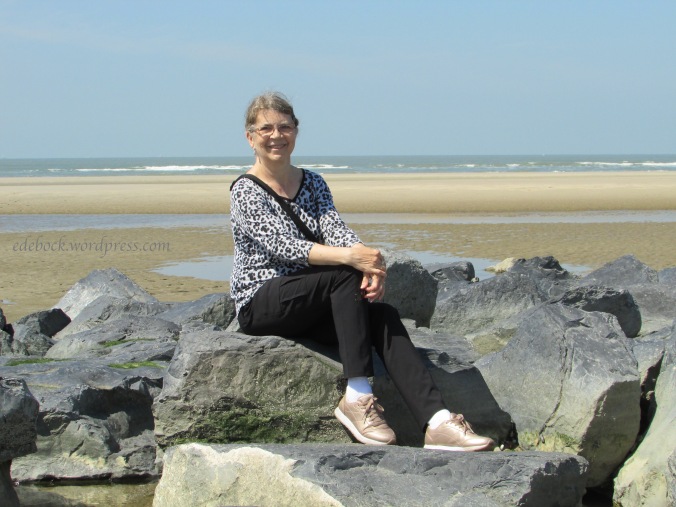 Everywhere we went in Belgium, we saw bright red poppies blowing in the breeze. I took this picture beside the road where we parked when we visited the beach. As I walked the sandy beach trail, I recited bits of John McCrae’s famous poem, In Flanders Fields. Little did I know that within a couple of hours, I’d be standing by his grave! 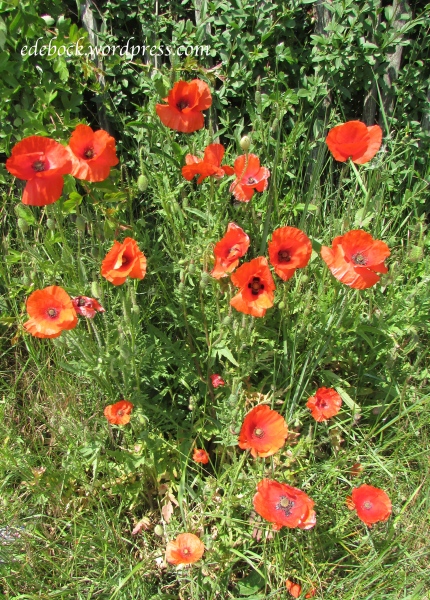 Just past Oostende we turned inland again and headed toward Ypres. Belgium is a beautiful country; a lush coastal plain where we saw sheep, goats, and dairy cattle and small fields in every stage of growth from recently seeded to approaching harvest. The easiest crop for us to recognize was the bright yellow canola in bloom. Belgium hasn’t always been so pastoral though. Our main purpose for visiting Ypres was to see the World War I cemetery there, a sober reminder that the beautiful countryside has been torn by war on more than one occasion. We weren’t sure how to find the cemetery, but suddenly before we reached the town, there it was. 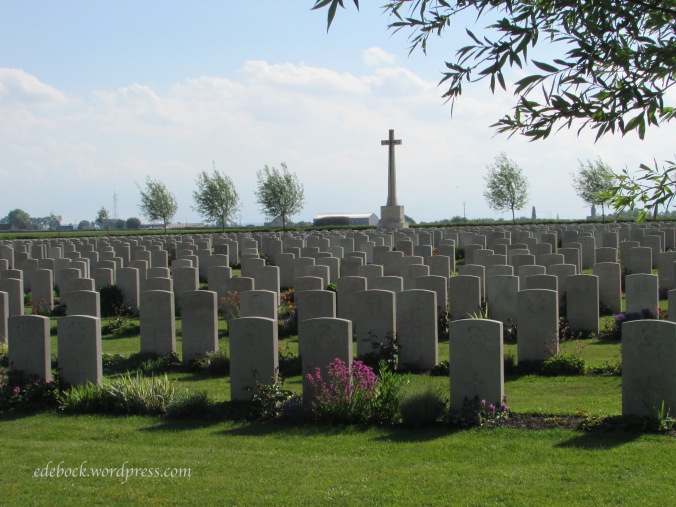 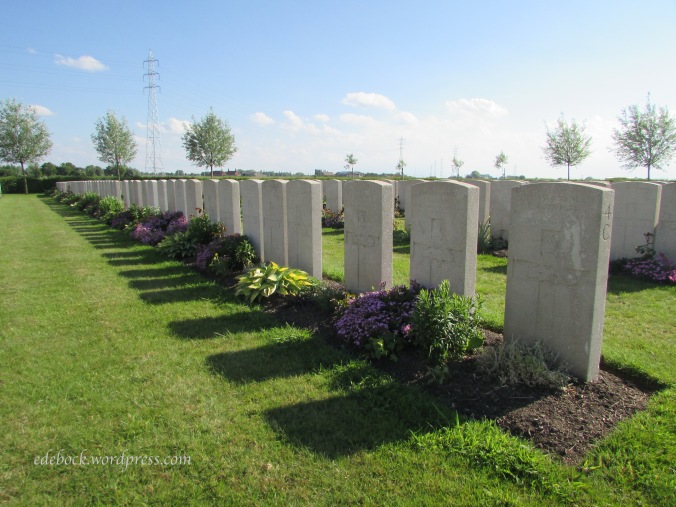 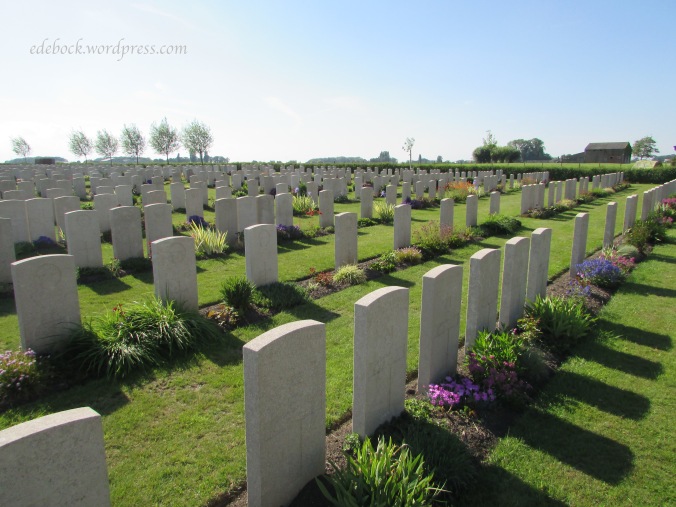 It would take hours to read every headstone and many of them are weathered to the point where it’s difficult to make out the names, but of the ones I read, there were some that stood out to me. 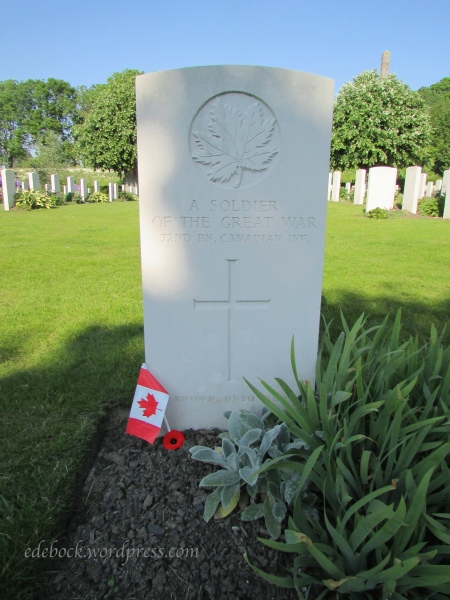 “A Soldier of the Great War”

Like the other unidentified soldiers in the cemetery, the inscription at the bottom of the headstone says “Known Unto God”. All that is known for sure is that this young man was a member of the 72nd Canadian Infantry Battalion. Whose son was he? Whose brother? Which family was left wondering what had become of their loved one? Where his body lay? 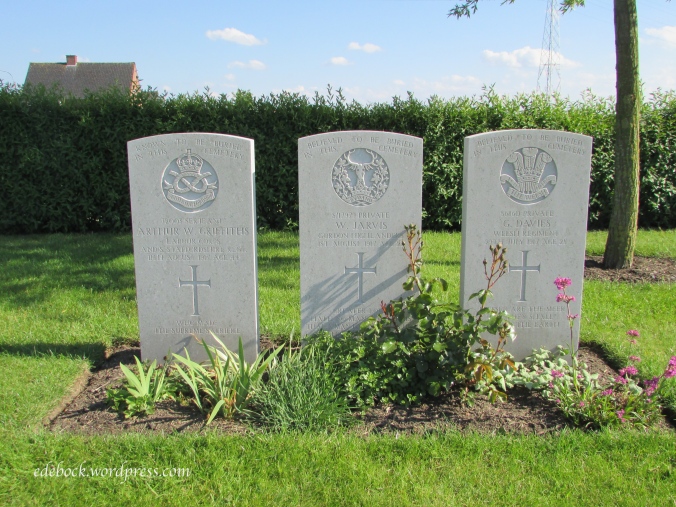 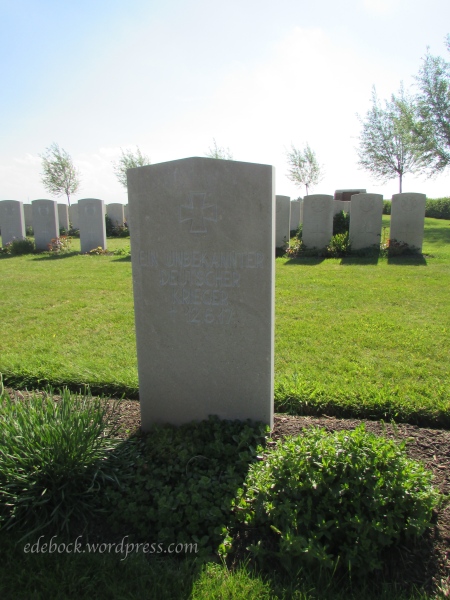 This one says “Ein Unbekannter Deutscher Krieger” (an unknown German warrior). He was the enemy, but he was also someone’s son, someone’s brother. In death they’re all the same.

Visiting the cemetery and seeing the graves of so many young men was sobering, but realizing that a kilometre or so down the road, there was another one with more than 1200 more graves in it was overwhelming. This was the Essex Farm cemetery and it was in this vicinity that Doctor John McCrae penned his famous poem while working at the medical station that had been set up there. It was also here that I found his grave. 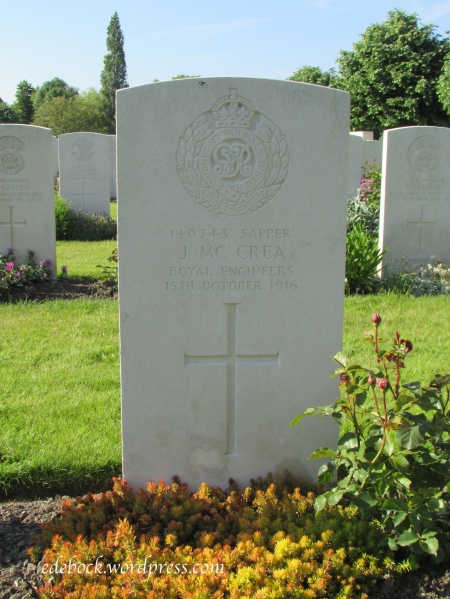 Just over the rise behind the Essex Farm cemetery is this beautiful scene, but notice the white sign on the nearest tree. 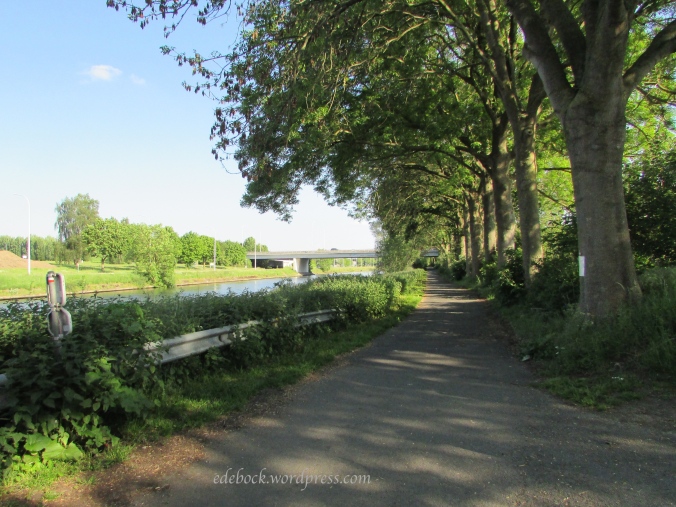 Here’s what it says: 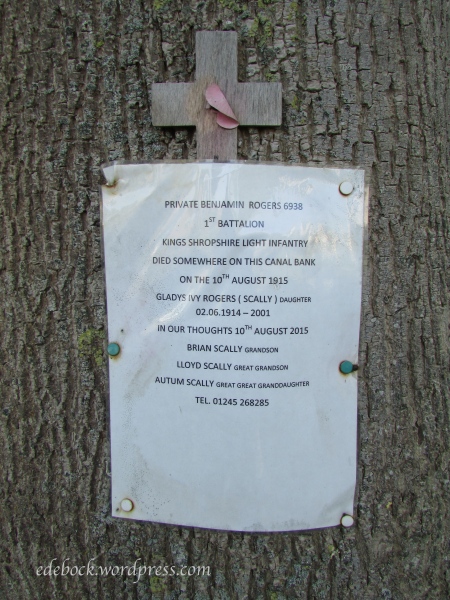 When we left the second cemetery, we turned back toward Bruges. We returned the car 11 hours and 327.5 km after picking it up. With the help of a paper map and the vehicle’s navigation system which didn’t speak any English, we’d covered a significant portion of Belgium and managed not to get lost!