On the top of a hill about half an hour northeast of here, is a collection of rocks with a long history and a story to tell. The Viking Ribstones are quartzite boulders carved by the nomadic First Nations people who inhabited the prairie in years gone by. The stones stand as a monument to Old Man Buffalo, the spirit protector of the herds that provided them with food, hides, utensils, tools, and so much more. Grooves carved in the two largest rocks in ancient times are thought to represent the ribcage of the buffalo and circular holes may represent arrow or bullet holes.

We weren’t too keen on spending a cool rainy afternoon cooped up in the house with three restless grandchildren who are visiting for the Labour Day weekend and Drew, the oldest, has been wanting to see the Ribstones since he first heard about them, so off we went. Thankfully, the rain was nothing more than a light drizzle as we approached the hill, the highest point for miles around.

Historically, natives in the area left offerings to Old Man Buffalo at the Ribstones before hunting and after a successful hunt. Today, this is still a sacred and revered site to the First Nations people who continue to visit and leave offerings that include braided sweetgrass, tobacco or cigarettes, and other small trinkets. Five-year-old Simon was naturally curious and wanted to play with some of these objects, but in an attempt to teach him respect for the sacred nature of the place, we explained that it was something like a church and that the objects were similar to what we put in the offering plate at church.

Ribstone sites are very rare and this one has been designated a provincial historic resource. Only nine have been found in Alberta and this one is particularly significant because the stones remain in their original setting.

Colourful ribbons and prayer cloths hang from the fence enclosing the site and trees in a nearby grove. Some have clearly been there for a long time, while others are newer. 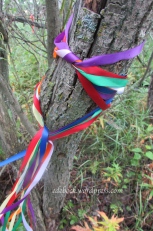 The hilltop is a peaceful spot overlooking fields of grain in every direction. Hopefully the rain will let up and harvest can begin soon.